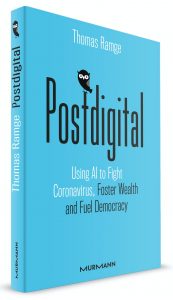 We are honoured to present to you an exclusive excerpt from digital thought leader and bestselling author Thomas Ramge’s new book Postdigital. Using AI to Fight Coronavirus, Foster Wealth and Fuel Democracy:

In concrete terms, what would a postdigital world look like in which people — both individually and as a society — used digital technologies sovereignly? With respect to the four primary areas of the techlash critique, a scenario for the future is emerging.

Technology is never good or bad. It depends on what we use it for. This statement, constantly repeated by tech-fixated idealists, is […] naive. Technology is usually developed for a specific purpose in a socio-technical context.

In a green postdigital world, the fight against climate change will be a pressing goal, and perhaps the most important goal of new technological development. Perhaps in the fight against global warming, digitalization might even gain a second chance to radically improve the world: with decentralized energy networks, energy-efficient autonomous vehicles or a digitally controlled Cradle to Cradle (circular) economy. New green technologies might not only delay climate change. There will be an increasing importance for digitally supported innovations that promote resilience — that is, they will make it easier for people to deal with the actual consequences of climate change.

The future can’t be predicted, but it can be created.

The future can’t be predicted, but it can be created. What’s stopping us from embracing a postdigital future with a radical paradigm for evaluating technology’s costs and benefits? Or we could formulate the question positively: What would we need to make this vision of a postdigital future a reality? Gesche Joost, a scholar of design, Germany’s former Internet Ambassador and a member of SAP’s board of directors, answers the question with two words: “digital sovereignty.” But Joost also wishes that critiques of technology were more constructive. I share this view.

No matter how attractive or even justified the ideas of techlash may be, the perpetual demands for absolute data protection and absolute minimization of data use are as wearying as an endless wait on hold for the next available agent, and as unproductive. The answer to techlash, says Joost, can’t be for people to withdraw into a technological backwater. Constructive criticism of technology, on the other hand, will help us regain our digital sovereignty. This can only succeed if we develop digital technology that corresponds to our own desires and values, improve our ability to use it through digital education and finally turn the concept of a common digital market for like-minded countries into economic reality. More specifically, this means:

If superstar firms construct data monopolies, then the data needs to be made open.

All of that is not just desirable, but the prerequisite for bringing the rebound effects of digitalization under control in the postdigital age. 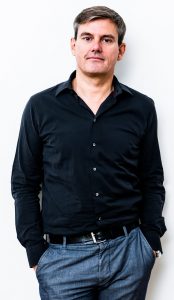 Thomas Ramge is a research fellow at the Weizenbaum Institute in Berlin. He has authored more than a dozen nonfiction books, including Who‘s Afraid of AI, Reinventing Capitalism in the Age of Big Data, coauthored with Viktor Mayer-Schönberger, and The Global Economy as You’ve Never Seen It. Ramge has been honored with multiple journalism and literary awards, including the Axiom Business Book Award’s Gold Medal, the getAbstract International Book Award, strategy+business magazine’s Best Business Book of the Year (in Technology and Innovation), the Herbert Quandt Media Prize, and the German Business Book Prize. He lives in Berlin with his wife and son.